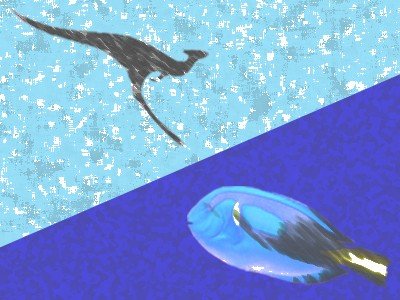 Qantas is generally associated with aircraft flying at 10,000 metres, and a red kangaroo. However, throughout June and July the airline’s focus was a forgetful blue fish called Dory who lives several metres under the sea.

Partnerships are nothing new to large companies and Qantas has had its fair share of winning partnerships. Qantas Wallabies team sponsorships, ‘Movember’ decals on their 737 fleet to promote men’s health, and a global airline alliance with Emirates have all seen the airline in the news over the past few years.

But the airline’s strategic partnership with Disney is unique. It has seen a Boeing 767 adorned in a bright, colourful Disney’s Planes livery, exclusive movie premieres shown to eager children flying high above the clouds, and Disney themed inflight entertainment for Qantas’ young flyers to enjoy.

But the scale and scope of Qantas’ digital advertising footprint, as well as the popularity of Disney movies can be used not only to drive awareness of Qantas, but make a meaningful difference for issues that all Australian’s should be aware of.

A long-awaited sequel to Finding Nemo, the US$200m production has already grossed US$785.2m at the box office. It’s a hit, and the film, set in the Great Barrier Reef, is known world-wide.

But the Great Barrier Reef is in turmoil. Ongoing weather changes and human factors have has seen over one third of all corals bleached in recent years, and urgent action is required to save this Great Wonder of the World.

The popularity of Finding Dory offered Qantas a unique opportunity to support rehabilitation efforts at the reef and drive awareness of both the Reef and its plight through mobilising both its traditional and digital marketing platforms.

The partnership allowed Qantas promote the Great Barrier Reef in conjunction with Tourism Events Queensland. This saw Finding Dory / Great Barrier Reef themed branding across the Qantas domestic network, particularly noticeable in their busy hub in Sydney where many national flights to Queensland depart from.

But the true value of the partnership was realised digitally, with all voluntary contributions to Qantas’ carbon offset programme, voluntarily collected during the online booking process, going towards supporting regeneration of the Great Barrier Reef catchment area.

Qantas’ head of Brand, Marketing and Corporate Affairs Olivia Wirth explains: “We wanted to shine a light on the great work the Catchment Conservation Alliance does to preserve the Reef for the future and give them a helping hand – and encourage more people to see the Reef for themselves. It’s really exciting to show that tourism and conservation can go hand in hand.”

The conservation push was supported digitally with a branded campaign across Qantas’ website which sees the messaging shared in nations Qantas flies to such as the UK, USA, Canada, Japan and Singapore,

On the airlines YouTube channel, which boasts 34,300 subscribers and 28 million total views, the airline has created a specific video to explain the partnership (https://www.youtube.com/watch?v=CzzsYhnJHBg) which itself was shared to Qantas’ 884,300 facebook fans and 111,000 twitter followers.

Further, less traditional digital assets were mobilised through by a 16 page special in Qantas’ “Spirit of Australia” showcased in the Qantas Magazine App; while people using Qantas’ digital inflight entertainment system across the airline’s network of over 100 aircraft will be exposed to the message about the Barrier Reef.

The campaign idea shows meaningful impacts can be generated while boosting business outcomes by aligning a brand with a worthy cause linked to its core business and delivered through an array of digital and traditional media.